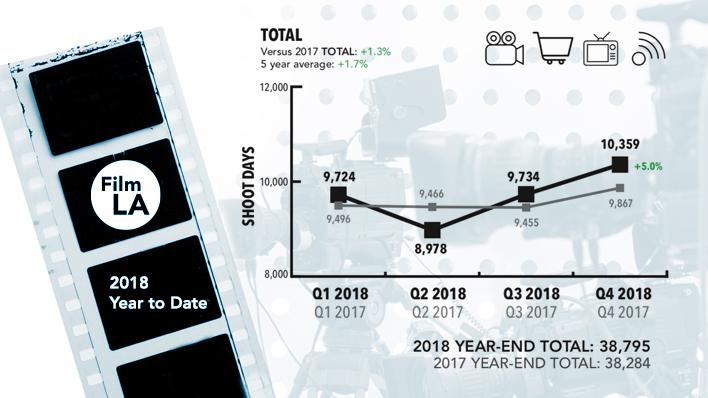 On-location filming in Greater Los Angeles rose 5.0 percent in the fourth quarter of 2018, a strong finish for a year in which local film production came close to record highs. According to a FilmLA report released today, area filmmakers logged 10,359 Shoot Days (SD)* in the fourth quarter, and 38,795 SD for all of 2018. Reasons for the 1.3 percent year-over-year annual increase includes double digit increases in Feature film (up 12.2 percent), TV Drama (up 10.6 percent) and TV Pilot (up 15.2 percent) production, plus a strong showing for Commercials (up 8.7 percent).

“2018 concluded a third consecutive year of record-level film and television production for greater Los Angeles, due in no small part to the California Film & TV Tax Credit program,” said FilmLA President, Paul Audley. “The return of jobs and businesses in the film industry is great news for our region and we look forward to a great 2019.”

Feature film production increased 15.5 percent for the fourth quarter to 1,078 SD. Incentivized projects brought to Los Angeles by the California Film & Television Tax Credit Program contributed 11.4 percent, or 146 of the 1,078 SD in the Feature category for the quarter. Incentivized Features filming in Los Angeles during the fourth quarter included Birdbox, Once Upon a Time in Hollywood and Rim of the World.  The Features category finished the year up 12.2 percent, to 4,377 SD.

Television presents a more complicated picture.  Although the Television category lost a little ground in the fourth quarter (slipping 0.3 percent to 3,795 SD), TV Reality production (up 21.2 percent to 1,052 SD) and TV Dramas (up 9.0 percent to 1,489 SD) both staged late-year rallies.

Incentivized TV Drama projects accounted for 15.3 percent, or 282 of the 1,489 SDs recorded in that category for the fourth quarter. Qualifying TV Dramas that filmed during the period included Euphoria, Good Girls, Legion and Lucifer.

Incentivized TV Comedy projects accounted for 28.7 percent of the activity in the category, contributing 120 of the 393 SDs for the quarter. Qualifying TV Comedy projects that filmed during the fourth quarter were Crazy Ex-Girlfriend and VEEP.

On-location Commercial production continued its upward rise in the fourth quarter, increasing 5.5 percent (to 1,404 SD). The Commercials category finished the year 8.7 percent ahead of 2017, with 6,033 SD in total.

4 Comments on “2018 Stands as Second Strongest Year for On-Location Filming in L.A.”