This year, Friends of the Los Angeles River (FoLAR) conducted its 30th Annual Los Angeles River Clean-Up.  To commemorate this special anniversary, organizers divided the river into three sections and hosted three separate clean-up days. FilmL.A. participated in the clean-up for its fifth straight year, using it as an opportunity to give back to the local communities where filming happens.

men McRae has participated in multiple clean up events. “Participating in events like the LA River Clean Up is so fulfilling,” McRae said of the experience.

This year, groups and individuals were able to participate with LA River Clean-Up efforts at the Valley, Glendale Narrows or Lower River sites on April 16th, 23rd, and 30th, respectively.  In the Marsh Park/Frog Town area where the FilmL.A. CARES Team landed, participants were greeted by Adrian Vazquez, a consultant in Senate Pro Tem Kevin De Leon’s office, who gave safety instructions to participants.  FoLAR took care of giveaways and refreshments.

The FilmL.A. CARES Team recovered plastic bags, mattresses and multiple shopping carts from the river’s banks.  Other interesting treasure pulled from the river this year were pillows and bedding, as well as mud-soaked luggage, clothing and tools.

“Congratulations to staff at FoLAR for another successful river clean up,” said FilmL.A. President Paul Audley.  “FilmL.A. is proud to have participated in the LA River Clean Up for five years and we’re looking forward to continuing this tradition for many years to come,” Audley said.

FilmL.A. thanks FoLAR and all other volunteers who joined us on the river that day!  To register for a future clean-up date or to learn about other LA River activities and events, visit www.folar.org. 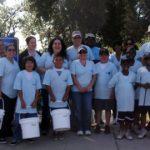