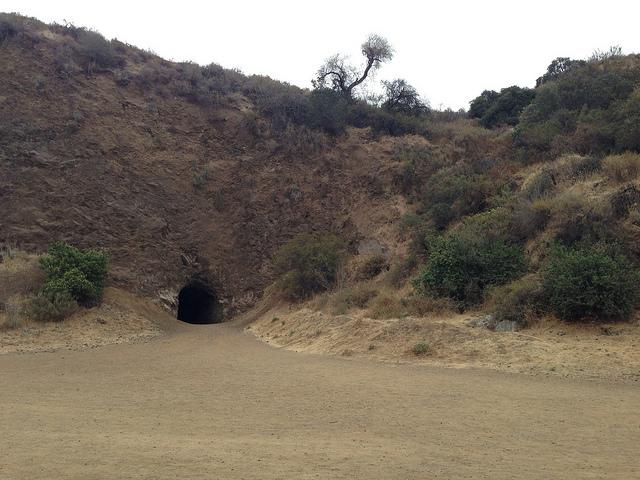 Soldiers attempt to enter cave to destroy the space alien that has been terrorizing the people of Beachwood (yes, Beachwood Canyon), Beverly Garland, Lee Van Cleef, and Peter Graves in IT CONQUERED THE WORLD (1956).

Best known as the location from which the Batmobile sped out every week in the 1960s in search of villains committing dastardly deeds, Bronson Canyon and its cave has been featured in dozens of movies and television shows because of its craggy, desolate, and remote location, though just minutes above Hollywood on Canyon Drive in Griffith Park.  This area has been a popular shooting location since the 1930s, with almost every genre of film shooting some scene in the area.

A somewhat barren landscape, Bronson Canyon has small hills in its middle, with the canyon walls surrounding it. In the middle of the canyon is a large cave more like a tunnel, with one entrance on the west side and three entrances on the east.  In 1903, the Union Rock Co. opened the quarry in the canyon to mine granite for construction purposes.  The cave or tunnel was created during mining, which ended in the 1920s.

As early as 1914, the city of Los Angeles discussed building an entrance into Griffith Park through Bronson Canyon, but decided against it. In 1931, the city studied cutting a tunnel through the Canyon into the San Fernando Valley to facilitate traffic, but the money situation prevented it.

The first film shot at this location in 1919 was either The Lion Man or Lightning Bryce.  Warner Bros.’ I Am A Fugitive From A Chain Gang (1932) employed the canyon as the rock pile that the convicts picked at because it was only 10 minutes from the studio.  Bronson Canyon was chosen to represent the Andes for filming a ore digging mine because of its resemblance to South American terrain in For You I Die in April 1943, per the Los Angeles Times.  Director Charles Marquis Warren and producer John Champion of the film Hellgate felt that “…the canyon’s sheer 30 foot granite walls, mine tunnels, and general layout made the Hollywood location a better choice for lensing” than the site near Yuma, Arizona, according to the April 1, 1952 “Daily Variety.”

The lobby card shows Beverly Garland as she goes to confront and destroy the evil alien creature that is threatening the little town of Beachwood (yes, Beachwood Canyon), and her husband Lee Van Cleef, and his co-worker, Peter Graves, in the 1956 sci-fi thriller It Conquered The World.

Other films such as Invasion Of The Body Snatchers (1956), The Searchers, Lost Horizon, The Adventures Of Captain Marvel, Army Of Darkness, Cornered, Julius Caesar, Combat Squad, Strange Alibi, It’s Always Fair Weather, Cloak And Dagger, Son Of Sinbad, The Gallant Legion, Down Periscope, Monster And The Ape, And Ten Tall Men have filmed here, among many.

TV shows that have filmed here include all of the Star Trek series, the Monkees, Batman, The Lone Ranger, Mission Impossible, The Man From U.N.C.L.E., and the Three Stooges.