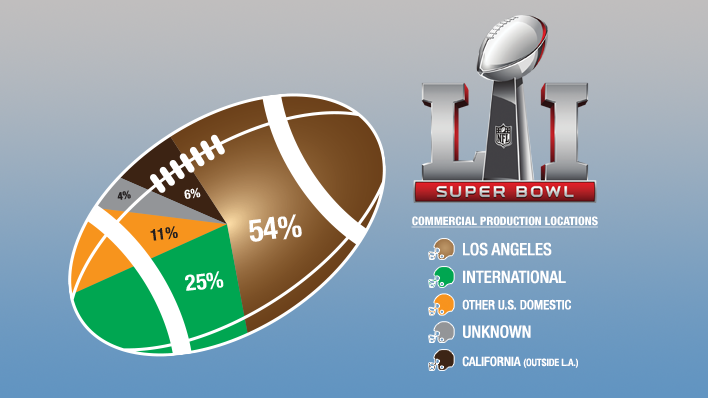 Last year, the Association of Independent Commercial Producers (AICP), with help from FilmL.A. Research, began a thorough analysis of Super Bowl commercial production to determine how much of the production work for these projects happens in the Greater Los Angeles Region.

The results of the year-long study were presented in a Los Angeles Times story in February, which highlighted, among other findings, the California is the destination of choice for the production of Super Bowl spots.  Moreover, the substantial production budgets allocated to these projects made the Super Bowl an economic windfall for the region.

“While international incentives continue to attract production away from other U.S. states, local infrastructure, crew base, and access to talent positions L.A. as the go-to locale for our industry’s biggest event. These high-budget projects generate thousands of jobs for local crew and inject millions in direct production expenditures in the region,”  said David Phelps, AICP Director of External Relations.

New York’s share of Super Bowl spots dropped in 2017 compared to last year, while other U.S. domestic locations (outside CA/NY) maintained their share of produced spots (11%).