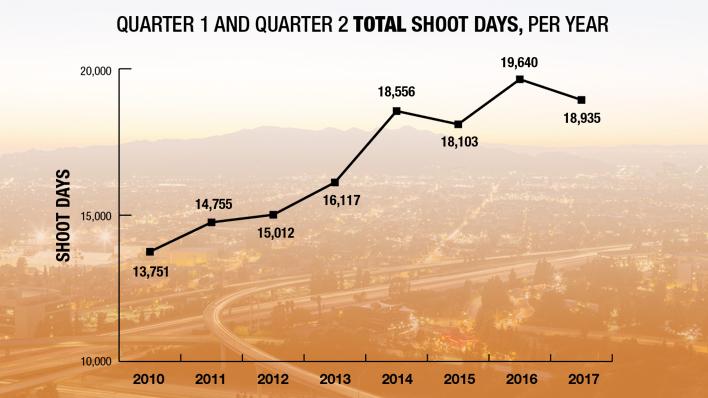 “Declines in any category need to be put in context: the year-to-date comparison for the last seven years shows 2017 is second only to 2016 for total Shoot Days,” said FilmL.A. President Paul Audley, who noted that 2016 was the best year on record for on-location production.

TV Comedy dropped nine percent (to 382 SD), and digital Web-Based TV also fell 21.8 percent (to 412 SD). Despite the drops in Comedy and TV Web, a comparison of the year-to-date data for the first two quarters over the last seven years reveals both categories are at record highs thus far in 2017.

TV Reality production saw a slight drop of one percent for the quarter (to 1285 SD). TV Pilots fell sharply for the quarter, dropping 60.4 percent (to 110 SD).  The drop in TV Pilot production mirrors the results of FilmL.A.’s forthcoming 2017 Pilot Study, which shows fewer pilots were ordered by networks over the last year. As a result, production centers from L.A. to New York saw declines in the category.

TV Drama production fell 24.3 percent (to 789 SD) due to several show cancellations in 2017. TV Dramas that helped drive production numbers during the second quarter of 2016 that were not in production in 2017 include Gilmore Girls, Good Girls Revolt, Hand of God, Mistresses, Roadies, Sweet/Vicious and The Catch.  The TV Drama category is having its third best year of the last seven, trailing 2016 & 2015 year to date.

Feature film projects produced 232 Shoot Days accounting for 22 percent of production in the category. Incentivized features for the quarter were Valley Girl, A Star Is Born, Inner City and Hotel Artemis.