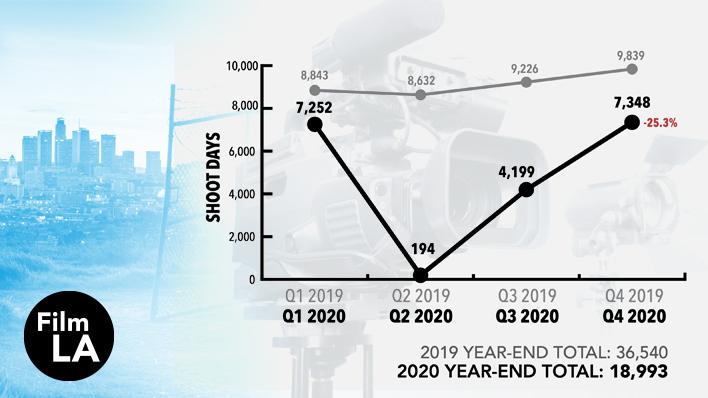 FilmLA, partner film office for the City and County of Los Angeles and other local jurisdictions—today issued a pair of reports illuminating the impact of the COVID-19 pandemic on the Los Angeles film economy. FilmLA’s year-end report for 2020 sheds light on the industry’s challenges to resume production last fall, while the 2020 Television Production Report dives deeper into the LA film industry’s most competitive segment—scripted television.

Powering forward since October, production activity picked up considerably in the fourth quarter of 2020 to reach 7,348 Shoot days (SD)*. Nonetheless, compared with the same period in the prior year (with 9,839 SD), overall Q4 production slipped -25.3 percent.

The Q4 increase over prior periods in 2020 was largely tied to the return of television production, with an influx of episodic television series and Reality TV shows that resumed filming in the fall. The 3,996 total shoot days for Television in Q4 even surpassed 2019 levels (at 3,716 SD) by 6.2 percent. Overall, television accounted for 54.4 percent of total Q4 shoot days, compared to just 38.2 percent in 2019.

Reality TV was the biggest television driver in Q4, as networks and streaming platforms scrambled to get more content to viewers. Year-over-year for the quarter, the number of Shoot Days for Reality TV grew from 1,006 in 2019 to 1,946 in 2020—a surprise increase of 93.4 percent. Even with the pandemic-induced filming moratorium from mid- March to mid-June, annual totals for Reality TV in 2020 (3,906 SD) exceeded 2019 levels (3,484 SD).

As the COVID-19 pandemic struck in the middle of the 2020 pilot season, it is no surprise that annual TV Pilot activity (149 SD in 2020) declined by -61.2 percent. As discussed in greater detail in FilmLA’s Television Production Report, an estimated 198 television projects were forced to shut down between mid-March and the end of May, 2020, including 57 TV pilots. What was to be a solid year for scripted TV was quickly reversed, as production schedules were delayed until the fall of 2020 and/or pushed back into 2021.

Meanwhile, Feature Film work, reaching 621 SD in Q4, finished last year down -55.8 percent to 1,641 SD. Seasonal patterns aside, recovery for the category could be close at hand; Q4 levels for Features resemble pre-pandemic levels seen in Q1 of 2020.

“In summary, the impact of COVID-19 on local film production and jobs cannot be overstated. With production paused for 87 days and the industry responsible and cautious in returning to work, total annual production fell to unprecedented lows.”