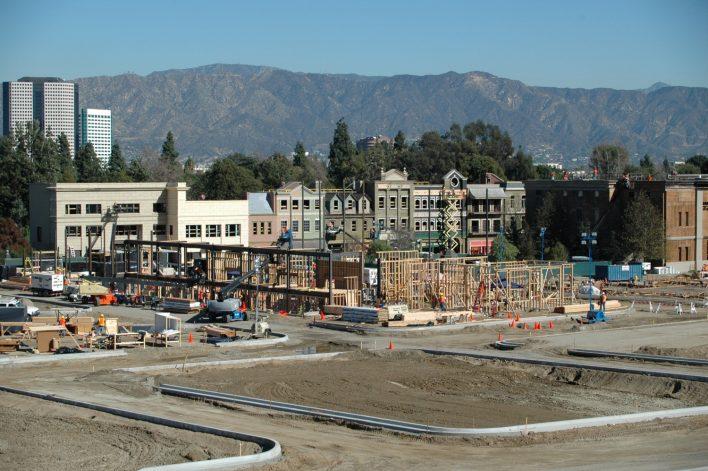 Earlier this year, we reported on the Southern California expansion plans currently underway by Paramount, Disney and NBCUniversal.  Each studio’s project means billions invested in the local economy and, more importantly, tens of thousands of jobs.  In the coming months, Film Works will follow up on each plan as they progress with in-depth articles.  First up, NBCUniversal.

Earlier this month, Film Works representatives attended the first public hearing about NBCUniversal’s revised Evolution Plan, which is now being referred to as the “No Residential Alternative”.  As the overview below shows, the original Evolution Plan included almost 3,000 residential units occupying 180,000 square feet of space.  The residential portion of the original plan has been reworked, but at the hearing, a representative from NBCUniversal said the company did not make the decision to eliminate the residential plan lightly:

“We took a hard look at the residential units we wanted to build with the project and decided to eliminate the proposed 2,937 units.  We did not make that decision lightly…  but it will reduce the environmental impact and we hope [by eliminating it] to move the project along.”

Part of the reason to drop the residential plans stemmed from concerns expressed by Los Angles County Supervisor Zev Yaroslavsky and Councilman Tom LaBonge, who both felt NBCUniversal should focus on its two core businesses: filmed entertainment and tourism.  Yaroslavsky said the plans for putting thousands of new residents on the “often-noisy front lines of entertainment production makes no sense” and could lead to the permanent elimination of the studio’s backlot:

Putting thousands of new residents right on the often-noisy front lines of entertainment production makes no sense. Not only does it detract from Universal’s core mission, it also makes it all but inevitable that the new residents’ complaints about the noise and distractions of making movies and TV would eventually derail that part of the business altogether.

That’s not an insignificant loss to our shared culture and economy. After all, you can build residential units just about anywhere, but once you eliminate a studio backlot, it’s gone forever. And so are the jobs it supported.

The “No Residential Alternative” is in many ways even more ambitious than the original plan.  In terms of expanding studio production space, the revised plan includes 1.45 million square feet rather than 1.24 million as originally proposed.  Similarly, the plans to expand the theme park and Universal City Walk entertainment district have more than doubled, which explains why the plan now includes the addition of two 500-room hotels rather than just one:

One of the biggest additions to the Universal Studios theme park will be The Wizarding World of Harry Potter, a duplicate of the popular attraction in Orlando, Florida that caused a 68% spike in attendance during its first three months of operation.  NBCUniversal told the Los Angeles Times it would spend “several hundred million dollars” to  create the attraction, which will include a re-creation of Hogwarts Castle along with Potter-themed rides, shops and restaurants.  The addition of the Harry Potter attraction alone will support 1,000 new jobs in Los Angeles, according to NBCUniversal.

Indeed, the economic impact estimates for the Evolution Plan in the Los Angeles region are staggering.  NBCUniversal will be investing $1.6 billion during the 20-year project and the total economic impact is estimated to be over $6 billion in the broader economy.  During the construction process–which includes $100 million in public transportation and transit improvements–30,000 new jobs will be created.  Upon completion, more than $2 billion in new economic impact will flow into the local economy, resulting in $26 million in new tax revenue for the city and county.  Most importantly, upon completion the project will support a total of 10,000 new full and part-time jobs.

And for the dozens of entertainment industry union members who attended the public hearing, those jobs are the most important benefit of all.  IATSE Local 80’s Russel Nordstedt spoke for many when he applauded the Evolution Plan for creating thousands of new jobs:

“It’s the jobs that are important.  This will bring thousands of jobs to the area, and many of them will be permanent.”