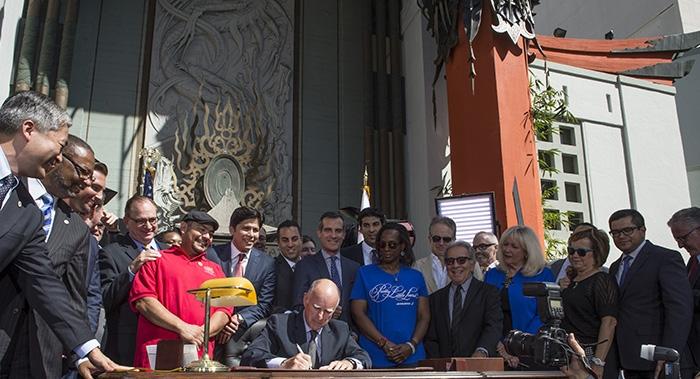 On September 18, 2014, California Governor Jerry Brown signed Assembly Bill 1839 (Gatto/Bocanegra) — the California Film and Television Job Retention and Promotion Act — into law.  The bill signing took place before a crowd of elected officials and film industry professionals at the TCL Chinese Theater in Hollywood, CA.  The event was monumental for California film and television workers, as it signaled the state’s willingness to fight for their jobs and defend one of its cherished heritage industries.

AB 1839 increases funding and eligibility for California’s Film & Television Tax Credit Program to make the state more competitive in attracting and retaining these projects.  An expanded tax credit program means more jobs and an increase in tax revenue for state and local governments.

Many FilmL.A. staffers lent their support to the successful passage of AB 1839.  FilmL.A. was a visible partner using its assets for strategy, research, communications, grassroots engagement and coalition-building.

“We are excited to have been a part of the team,” said FilmL.A. Executive Vice President Art Yoon.

FilmL.A. participated via a partnership with The California Film and Television Alliance– a coalition of guilds, unions, producers, small businesses, studios, and associations that have worked together for more than a decade to promote, improve, and enhance film and television production in the State of California.

After the AB 1839 signing ceremony, FilmL.A. hosted a post-signing celebration at the nearby Hard Rock Café.  The not-for-profit presented attendees with Film Works CA stickers and grocery bags made of recycled Film Works street banners.

“Governor Brown, Senator De Leon, and Assemblymembers Gatto and Bocanegra deserve a lot of credit for bringing this over the finish line.  Sacramento stepped up, and now L.A. and FilmL.A. face a fairer fight in returning our region to its rightful place as the entertainment capital of the world,” Yoon added.

FilmL.A. staff offer their thanks and congratulations to our Alliance partners, and all other AB 1839 supporters statewide.

The Members of the California Film and Television Production Alliance include: