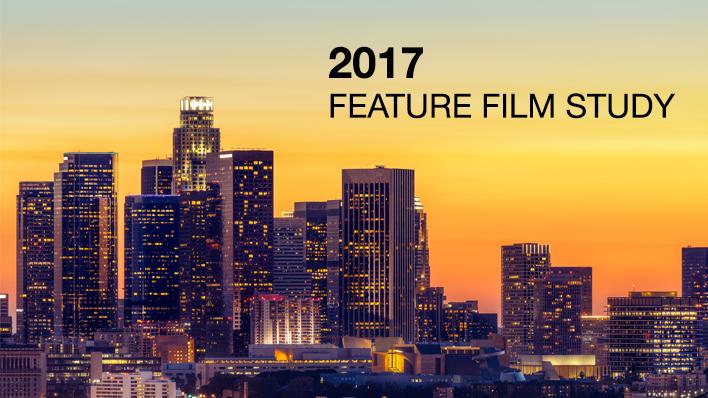 FilmL.A. has released a new report prepared by its research division. The 2017 Feature Film Study analyzes the 100 highest-performing U.S. feature films released theatrically last year, identifying where these films were made and how much was spent to produce them. The report also examines five-year trends in feature production including physical production, postproduction and animation.

Among non-U.S. jurisdictions, the top production center in the 2017 study was Canada, which hosted a record 20 films, followed by the United Kingdom (U.K.) with 15 projects. Within Canada, the top provinces were British Columbia (11 films), Ontario (7), Quebec (1) and Manitoba (1). Within the U.S., top production centers included Georgia with 15 projects, California with ten films, and New York with six.

In addition to the world’s top production centers, production work for sampled projects took place in more than a dozen U.S. states, and 20 nations spread across the continents of Europe, South America, Africa, Asia and Australia.  Antarctica stands as the only region of the world untouched by a top movie released in 2017.

The report also found that postproduction can easily capture 50 percent of a film’s credited jobs, should the production budget exceed $100 million.  This is significant, as major production centers like Canada have invested heavily in the attraction of postproduction work, including visual effects, with dedicated incentives and infrastructure.

VFX work is also performed globally, with significant international presence in Canada and the U.K., plus the United States, New Zealand, Australia, Germany and France.

Animated films also had significant success at the box office in 2017, and a total of 14 animated films were included in FilmL.A.’s study. The U.S. produced five of the animated films in the study, with California leading the nation with four films. Meanwhile, international competitors continued to make headway. Canada, led by the Province of British Columbia, eclipsed the U.S. in 2017 by hosting six animated films.

“In an age when film production is an established global enterprise, California remains a top international competitor,” observed FilmL.A. President Paul Audley. “This report reinforces a fact that is increasingly well understood – that a skilled local workforce, robust infrastructure support, and a competitive film incentive are prerequisite for film project attraction at scale.”

The 2017 Feature Film Study, along with other reports from FilmL.A. Research, are available for download here (registration required).