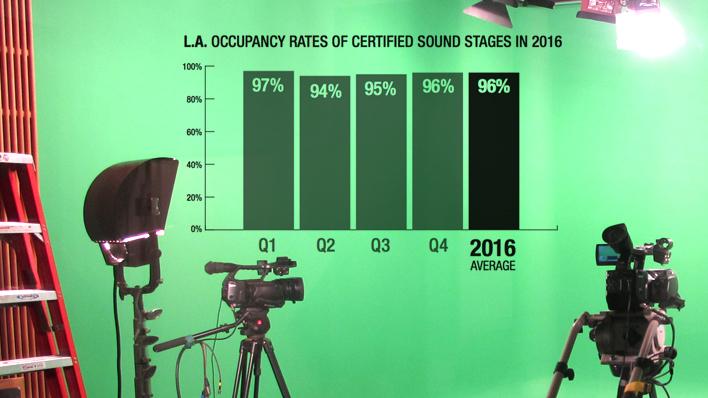 The complete report can be accessed here (upon registration): www.filmla.com/soundstage-study

The pioneering report aggregates data supplied by a growing list of FilmL.A. studio partners*, and examines both occupancy and active film and non-film use of 232 certified sound stages and adjoining backlots over a 12-month period in 2016.

The twelve FilmL.A. studio partners currently enrolled in the study operate 70 percent of the approximately 334 certified sound stages available for film production in Greater Los Angeles. Together, these twelve partners offer more than 3.3 million square feet of space, in individual facilities ranging in size from 1,000 to nearly 42,000 square feet.

The new data also confirms that L.A. area facilities are abuzz with film activity and that Los Angeles is very much a TV town. FilmL.A.’s studio partners reported an average occupancy rate of 96 percent in 2016.  This high rate of occupancy led to similarly high rates of utilization** – a total of 9,610 stage shoot days and 2,241 backlot shoot days were recorded for the year – with most dedicated to the production of one-hour series (4,983 shoot days), half-hour series (3,340 shoot days) and talk TV shows (1,560 days). 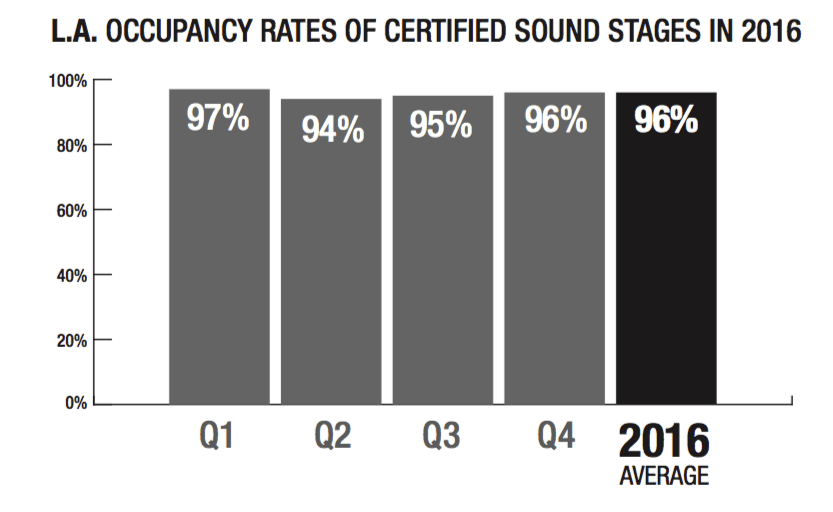 “These findings are significant, in that they reveal a portion of the Los Angeles production picture that has until now gone unviewed,” said FilmL.A. President Paul Audley. “We hope that the availability of this data, and our plans to expand it through new studio partnerships, will be an asset to business leaders and policymakers, and further public understanding of L.A.’s signature industry and the wide employment and economic benefits it brings.”

The findings in FilmL.A.’s Sound Stage Production Report are consistent with past analysis. On-location production levels in Los Angeles reached 39,605 Shoot Days in 2016, making last year the busiest on record.

On-location Television production in L.A. also set new records in 2016. The availability of granular project-level data from film permits (which FilmL.A. does not currently collect for sound stages) identified the California Film & Television Tax Credit Program 2.0 as the reason behind the increase.

The next installment of FilmL.A.’s Sound Stage Production Report – featuring six months of year-to-year comparison data – is anticipated in January, 2018.

** Utilization figures are based on reported days of physical production hosted by FilmL.A. studio partners.  One “Stage Shoot Day” or “Backlot Shoot Day” is defined as one crew’s work to film at one or more participating studios during all or part of any given 24- hour period. This measure determines how many days of work film crews perform during a given time period.  It is analogous to the permitted “Shoot Day” used by FilmL.A. since 2010 to quantify on-location filming.

Are you the operator of a small, medium, or large certified lm studio in Los Angeles? Would you like to see your facility represented in FilmL.A.’s next report? We’d love to include you in our efforts.