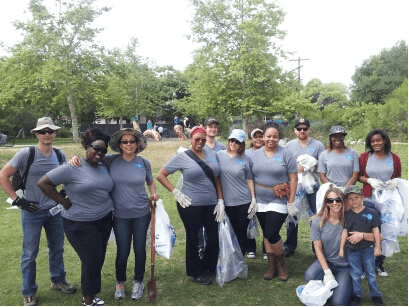 The 24th Annual Los Angeles River Clean-up was held on Saturday, May 18 and FilmL.A. was there to lend a few helping hands!

According to an estimate from FoLAR officials, more than 3,000 volunteers participated in this year’s efforts, pulling 25 tons of garbage from the L.A. River itself and surrounding areas.

Volunteers brought their own work clothes and sturdy shoes. FoLAR distributed grabber arm tools, waders and rubber boots for the volunteers who chose to go into the river to retrieve trash stuck in the vegetation. Volunteers also pulled trash from the soft sections of the river’s bank, an area frequented by fish and birds.

The Director of Human Resources for FilmL.A., Carmen McRae, has participated each of the two years that her company has organized a team.  “I usually pick a spot that’s really bad and I stay there until it’s all clean,” she says.  “After our first year, I vowed to never use a plastic shopping bag again because when thrown away, they all seem to end up here,” she added.

At five of the fifteen river sites—Sepulveda Basin, Bette Davis Picnic Area, Steelhead Park, Compton Creek and Willow Street Estuary— scientists formed teams to sort and classify a percentage of the trash collected for characterization.  The data collected will be organized into a report.

FilmL.A.’s participation was coordinated by Communication Specialist Danielle Matthews Walker. “I love organizing this event,” Matthews Walker stated. “It gives the community a chance to see the company’s compassion for the areas we serve and personifies the message that FilmL.A. CARES!”