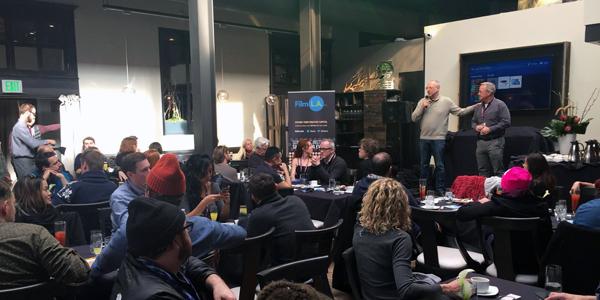 In late January, FilmL.A. sent a team to the 2016 Sundance Film Festival in Park City, UT. The purpose of the trip was to network with film and TV decision makers and help market Los Angeles as a film destination. The trip marked FilmL.A.’s fourth year at Sundance.

This year, FilmL.A. partnered with the Sundance Institute to organize an invitation-only Filmmakers Brunch on January 23.  Now in it’s third year, the 2016 Brunch brought together more than 200 film producers, executives and members of the entertainment trade media.

“The Filmmakers Brunch at Sundance offers a unique opportunity to celebrate the benefits of filming in California and the L.A. region to current, new and emerging filmmakers”, said FilmL.A. Executive Vice President, Art Yoon.

FilmL.A. also welcomed Rick Jacobs, Deputy Chief of Staff for Los Angeles Mayor Eric Garcetti’s office to the event.  During an address to our guests, Mr. Jacobs spoke about all of the City’s initiatives and efforts to support and welcome the filmmaking community.

“Sundance attendees tell us they look forward to attending FilmL.A.’s Filmmaker’s Brunch at the Festival,” said FilmL.A. President Paul Audley.  “Hosting this event gives us the opportunity to speak with key industry decision makers in a relaxed setting – where we can promote Greater Los Angeles as the best destination for filmmakers.”

Our congratulations and thanks go out to all of these films’ creators, cast members and crews.  It was a pleasure being there to support you, and we hope you’ll consider filming future projects here at home in the world’s entertainment production capital.