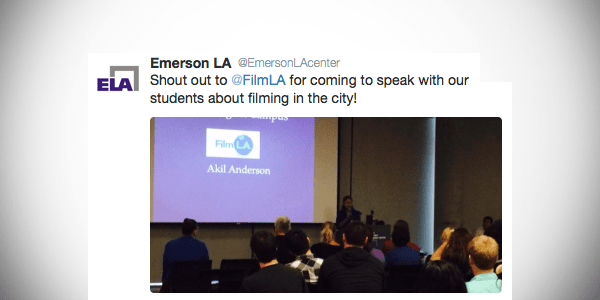 On any given day in our region, anywhere from 100 to 200 film and still photography projects happen on the streets of Greater Los Angeles.  That figure may not be all that surprising, but what may surprise you is that a significant number of those projects — approximately 8.4 percent — are student-led.

The large number of student film projects made in Los Angeles is an indicator of the region’s leadership in film production education.  Students enrolled in accredited undergraduate and graduate-level film programs are required to obtain permits to make their student films, and FilmL.A. has invested significant staff resources to assist these emerging filmmakers with the permitting process.

The first and most obvious benefit student filmmakers receive is a substantial cost subsidy.  Film permits processed on students’ behalf are subject to the same level of government scrutiny as regular film permits, but FilmL.A. substantially reduces permit application fees for students enrolled in accredited programs. Most student filmmakers pay only $25 per application (as compared to the standard rate of $625); those whose projects are complex or complicated pay $90.

In addition, all students who work with FilmL.A. are assigned a full time Student Production Coordinator to help them navigate the local film permitting process.  Like professional filmmakers, students also have access to free Production Planning aid, and experienced, higher-level students have access to our Online Permit System (OPS).

In a recent internal report prepared by FilmL.A. Research staff, FilmL.A. determined that in 2014 a total of 1,629 permits were released for student productions. Student projects rank third behind Commercials (2,657 permits) and Still Photography (2,582 permits) in terms of FilmL.A. permit volume.  By comparison, 835 permits were issued for Features in 2014, and 910 permits were issued for TV Dramas.  Altogether, the 1,629 Student permits released in 2014 generated 3,700 Shoot Days (SDs) of neighborhood filming activity, which surpassed TV Drama work in total SD count, if not in economic or community impact.

Together, these facts send a clear message — student filmmaking is a big deal in Greater Los Angeles.

“FilmL.A. is committed to supporting the next generation of filmmakers,” notes FilmL.A. President, Paul Audley.  “We’re proud to help facilitate students’ early filmmaking achievements, and to invest in their education by familiarizing them with the process of filming on-location.”