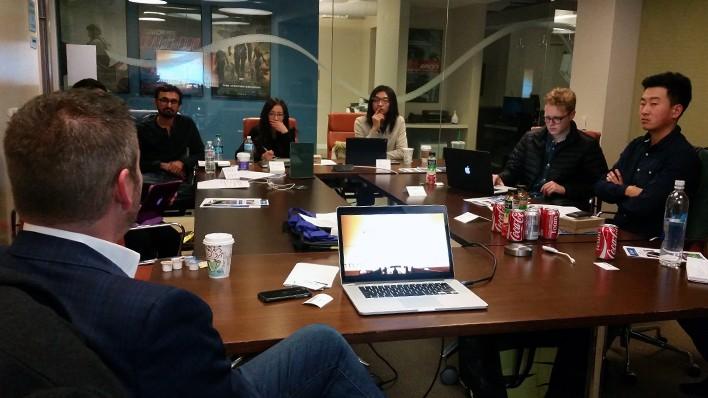 “This class gives emerging filmmakers the skills to earn a sustainable income in the creative arts industry,” Laboe said. “Creativity must be complimented with a clear understanding of the industry tools needed to create content.”

In addition to the standard curriculum, Larry’s students had the benefit of tapping into FilmL.A. and its staff – experts in on-location production in the the greater Los Angeles region.

The class learned about the permitting process from our Permit Administration and Permit Operations staff.

Manager of Permit Administration Marcus Bevans provided an overview of the permitting process from application submission to permit completion, payment and pick up. Marcus also covered insurance requirements associated with obtaining a permit.

FilmL.A.’s Student Production Coordinator, Angel Miranda talked about the process of obtaining a student permit and how it differs from a general permit. Angel also expressed the importance of following the guidelines of the permit and the Filmmakers Code of Professional Responsibility, so that film production activity will be continuously welcomed in the communities served by FilmL.A.

Lastly, the Director of Operations for FilmL.A., Josh Mingo discussed the process of permit creation and coordination, including the time it takes to process a permit and the importance of securing riders to change or modify existing permits.

“The work that FilmL.A. does daily to support emerging filmmakers and the people impacted by the industry is amazing.  The students were afforded the rare opportunity to learn from and observe a company that is a vital part of keeping L.A.’s film and television industry on track. By hosting events and groups in its offices, FilmL.A. demonstrates a continued commitment to the filmmaking community,” Larry said.

Laboe’s class also featured field trips to the various guilds and studios including YouTube Space to give his students behind the scenes access to the industry’s moving parts.