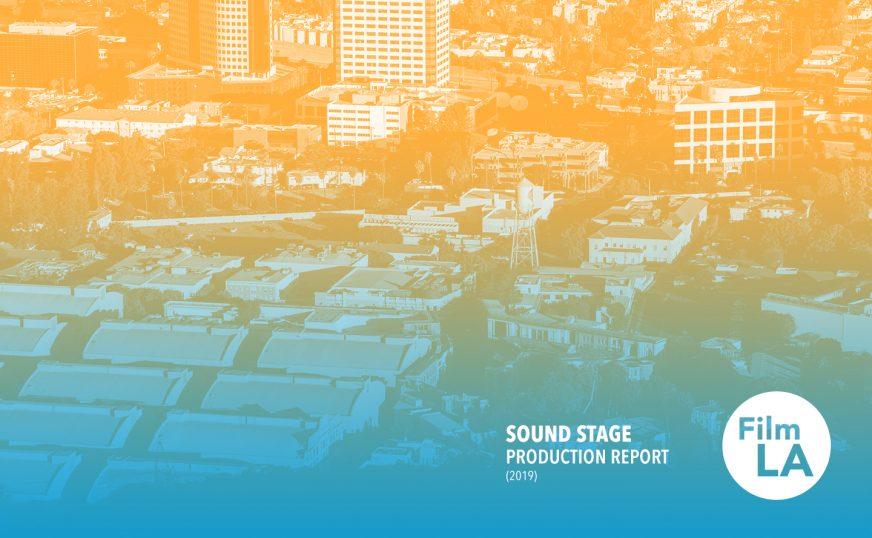 Every day in Los Angeles County, up to several hundred locations are used in film shoots. As the regional film office for Greater Los Angeles, FilmLA provides centralized coordination of on-location filming permits. This allows FilmLA to aggregate and publish quarterly data for on-location film production, covering categories in Television, Feature Films, Commercials, and other types of smaller productions.

But what about filming not happening on-location? Filming on certified sound stages does not require a film permit. Therefore, a sizeable portion of filming in taking place in the region is not included in FilmLA’s quarterly reports.

This is significant, as in addition to the major Hollywood studios with production/stage facilities, Los Angeles County has dozens of independently-owned, certified sound stages. Some of these independent studios are as large as the Hollywood majors.

The purpose of this ongoing report is to provide a more comprehensive picture of “behind the scenes” production activity on certified sound stages in Los Angeles County. The report is made possible by a unique data-sharing partnership with a select group of 13 studio partners, who by entrusting FilmLA with sensitive business information, help to bring the local production picture into clearer focus.

This is FilmLA’s third report on sound stage production activity. It focuses on calendar year 2019.

This is also the first FilmLA Research report published direct-to-the-web. Previously published works in this series can be accessed here, in Adobe .pdf format.

As we issue this report in 2020, Greater Los Angeles remains home to the world’s largest concentration of purpose-built sound stages and certified production space. Other major production centers, most in North America but at least one an ocean away, are growing quickly and now have sizeable production infrastructure holdings of their own.

Quixote North Valley Studios, opened in Pacoima in 2019, has five stages totaling approximately 75K square feet. LA North Studios’ second and third Santa Clarita-based facilities, added another stage of approximately 8K square feet in size at the second facility in 2020, and two at 44,250 and 55,750 at their third facility, which just opened in March. FilmLA Research is actively tracking several other sound stage builds in development, including the following:

Currently a total of 13 studio partners are enrolled in the limited data sharing partnership that makes this work possible. Recruitment of partners is ongoing.

It should also be noted that each of these facilities in this report operates certified sound stages in a campus-like environment with on-site services and amenities.

In all, FilmLA partners reported a total of 1,700 projects on sound stages and backlots in 2019. This was a five percent increase over 2018, when a total of 1,620 projects reported.

Comparing year to year, the mix of projects using partner stages was similar. One-hour and half-hour television series, taken together, comprised 27 percent of total projects in 2019, just as in 2018. However, the total number of series increased from 443 in 2018 (215 one-hour/228 half-hour) to 463 (238 one-hour/225 half-hour). The biggest change came from one-hour series count, which increased by 10.7 percent in 2019. Recent trends in television series production are discussed in detail in FilmLA’s 2020 Television Production Report.

We have had one network show and five streamers in the last one and a half years. Opening new stages on time and getting the word out that we had state-of-the-art sound stages available is the greatest challenge we faced in 2019.

FilmLA defines a shoot day as a crew’s permission to film at one or more defined locations during all or part of a given 24-hour period. These numbers include active shooting days and exclude set construction (“prep”)/deconstruction (“strike”) days.

Comparing stage shoot days on between 2018 and 2019, activity declined by -15.0 percent. Despite the increase in the number of television series, one-hour series declined by -31.2 percent, and half-hour by -18.2 percent. Though tenant information is confidential, a partial reason is the production of series with fewer episodes, which translates into fewer Shoot Days. Streaming companies, for instance, produce series with typically 8 to 10 episodes, versus 20 or more for some broadcast networks.

Another consequence of shorter seasons is for partner studios is increased turnover. Confided one studio representative who asked to remain anonymous, “the varying episode length for cable and streaming shows… has increased the turnover of our production space between clients, and presented new difficulties on scheduling and increased wear and tear on the facility.”

At the same time, another partner suggested, “we’ve increasingly seen more companies protecting their facility space for in house productions, and studios become more territorial, as the different streaming arms of the major studios have launched.”

Not all of FilmLA’s partner studios have backlots available for filming. Among those that do, the backlot of a certified studio provides another valuable form of production space, the use of which does not require a film permit from FilmLA or other local jurisdiction.

The use of local sound stages and backlots for production generated fewer Shoot Days in 2019 than in 2018 (14,492 versus 16,477). Nonetheless, studio operators labeled it a successful year, with one program partner describing occupancy levels as “excellent” and “one of the best years we’ve had in the last decade.”

Anecdotally, stage operators link this phenomenon to high local stage occupancy and tenant willingness to sign long-term lease agreements. Production companies, by choosing to hold on to space they may need in the near future, may reduce the number of potential Shoot Days each property can generate. No other change FilmLA observed year-over-year, such as changes in the types of productions accessing studio facilities or occupancy levels, can account for the sizeable reduction in annual Shoot Days from 2018 to 2019.

Streaming media was a major force behind the increased demand in 2019. The competition among the major streaming sites created demand unseen in the past ten years. Over the years, users have come from feature films, TV, commercials and streaming media. Even though FAANG (Facebook, Apple, Amazon, Netflix and Google) production companies continue to drive demand, one-hour episodics and feature films still have a major presence on our lot.

In 2019, FilmLA recorded a total of 36,540 on-location Shoot Days. Combined with 14,492 Partner Shoot Days on both stages and backlots, total Shoot Days would be closer to 51,032. This means that known Shoot Days at the 18 facilities comprised 28 percent of the total, and on-location days 72 percent.

Among studio partners, average reported occupancy was 93 percent for the year in 2019 (median 98 percent). A sound stage is considered 100 percent occupied if it is leased to a paying tenant (or often, multiple consecutive tenants) for 365 days per calendar year, regardless of how much filming the tenants conduct during that same period. Using this methodology, a reported occupancy above 100 percent is possible whenever leased stages are double-occupied or shared.

This year’s annual occupancy rate is slightly less than FilmLA has reported previously. This is not due to a general turndown in the business, but to the partial closure of one tracked facility for upgrading/construction during the period.

Occupancy was otherwise robust, with quarterly occupancy levels ranging anywhere from 46 to 100 percent, depending on the studio. Some partners expressed difficulty accommodating client need for production parking, and five studios reported 100 percent occupancy in all four quarters.

“We have entered another golden age of television that will dwarf what has come before, and Los Angeles is the epicenter. All eyes are on LA for the foreseeable future.”

Integral to FilmLA’s work is ongoing research into the benefits that local filming brings to the Los Angeles region. To that end, we maintain an internal research division devoted to the production, collection and dissemination of information regarding the U.S. film production economy and global production trends.

Provided you cite FilmLA as your source, you are welcome to use all information, charts, graphs, etc. that appear in our reports.

Have a question about this sound stage report or other film industry studies? Please direct inquiries and opportunities to Anne Wurts, Senior Research Analyst at 213.977.8636 or awurts@filmla.com