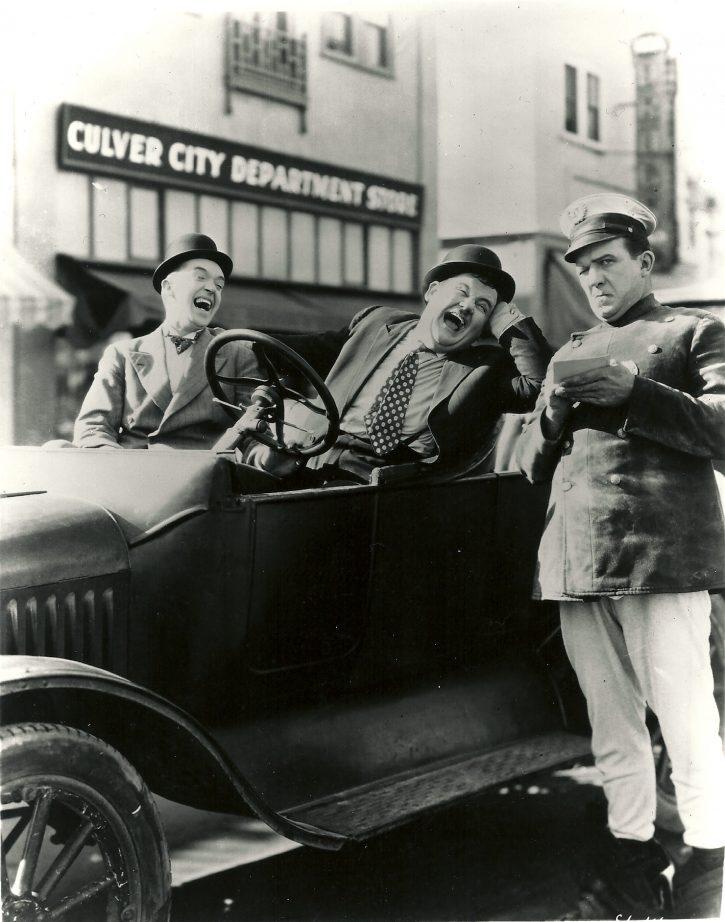 Hal Roach Studios loved to shoot all around downtown Culver City, as it was just a few blocks from the studio, located at Washington and National Blvds. In particular, filming crews shooting Charley Chase, “Our Gang” (aka The Little Rascals) and Laurel and Hardy shorts mostly focused on the two short blocks of Main Street, the world’s smallest Main St., when shooting small town retail locations. With the street’s short length, it was easy to shut it down to facilitate filming. It also genuinely represented small town America in its appearance.

The street had a little bit of everything: hardware store, drug store, clothing stores, bank, and department store, among others. It ran into Culver Blvd., with the small but elegant Culver Hotel located at 9400 Culver Blvd. During the filming of The Wizard of Oz, the munchkins lived at this hotel. The hotel could stand in for the more upscale part of the city. Filming also took place just south of the hotel on Main St., near what is now the movie theatre.

The picture in this post comes from the Laurel and Hardy film Leave ’em Laughing (1928) as they sit near 3815 Main St. The two men have just come from the dentist, where both have received anesthesia, which makes everything hilarious. They find that laughing gas and driving don’t mix, causing all sorts of traffic problems and jams along the street. Edgar Kennedy makes his first appearance in a Laurel and Hardy short as the frazzled policeman who pulls them over and ends up driving the car into a huge puddle.

One of the first shorts Laurel and Hardy made together, Putting the Pants on Phillip (1927), also filmed along the street, shooting all up and down both sides of the street from the Culver Hotel north and back.

Most of the buildings on the street still survive in their original 1920s look, with the hardware store in the middle of the two blocks the star of many shorts.