Spanning the Los Angeles River just east of downtown, the 6th Street Bridge, with its intricate design, wasn’t built to last.  Unbeknownst to its designers and the masons who built it, materials used in its construction would ultimately be the cause of the bridge’s decay.  When the bridge opened in 1933, nobody could have predicted that the high alkali content in its concrete, developed using a state-of-the-art process, would lead to structural erosion and force the bridge into retirement.

But that is exactly what happened, and later this year, we will bid the bridge goodbye.

Recognizing the need for a replacement, the Los Angeles City Council launched a contest in 2012 to design a new bridge.  In its decision making process, the City evaluated design concepts against community response and the total cost of replacement or refurbishment.  Eventually, the City Council selected a design submitted by architect Michael Maltzan called “The Ribbon of Light.”  The new design will completely replace the existing structure and add a variety of architectural features. The designers’ goal was to construct a modern structure that pays homage to days past, while looking forward toward L.A.’s bright future.

Tearing down the old and erecting a new bridge will come with a $420 million dollar price tag.  The City opted for replacement, rather than refurbishment, since the latter would have cost an additional $30 million.  Construction of the new bridge will commence by year’s end and take four years to complete. During this period the bridge will be closed to vehicular and pedestrian traffic and to film production activity. 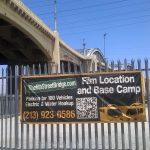 The 6th Street Bridge has been in demand by filmmakers and content producers for many years. Those who’ve scouted the bridge relish its gritty, urban feel, making it an ideal location for a random flash mob as seen in Pharrell Williams’s “Happy” music video, or a 1950’s drag racing scene as depicted in Grease. Whether for a period piece or a contemporary project, the 6th Street Bridge has been a popular standing set for content producers.

While we join our fellow Angelenos in marking the passing of the 6th Street Bridge, FilmL.A. looks forward to facilitating filmmaker access to its replacement.  For information about filming in construction-adjacent areas, please contact FilmL.A.’s Production Planning team.  To share your favorite 6th Street Bridge filming story, please paste a comment below.

If you are interested in learning more about the history of the 6th Street Bridge, Art Share L.A. is hosting an art exhibition and panel discussion in September.  To learn more, visit http://artsharela.org/event/ode-to-6th-street-bridge-gallery-opening-art-share-l-a/