On-location filming in Greater Los Angeles slid 5.2 percent in the second quarter of 2018, according to a FilmL.A. report released today. In all, 8,978 Shoot Days (SD)* were logged during the period, including all filming categories tracked by the nonprofit. On-location Feature production is up for a second consecutive quarter.

“We are grateful for the continued positive impact of the California Film Tax Credit as it boosts employment and production in Greater Los Angeles,” said FilmL.A. President Paul Audley. “While TV Drama is down quarter to quarter, much of that is due to the production cycle of these shows which went on hiatus during the second quarter. Increases in feature film, commercials and TV comedy production are very good news for the region’s economy.”

Incentivized projects brought to Los Angeles by the California Film & Television Tax Credit Program contributed 11.3 percent or 136 of the 1,184 SD in the Feature category.  Incentivized Features filming in Los Angeles in the second quarter included Once Upon a Time in Hollywood, Captain Marvel and Bumblebee.  Also driving Feature category gains was the film Wine Country, directed by Amy Poehler and backed by Netflix. The film shot heavily in the Los Angeles region during the second quarter. 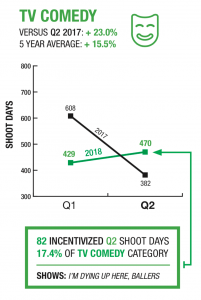 TV Dramas were down slightly, slipping 9 percent (to 718 SD) for the quarter.  Incentivized TV Dramas accounted for 28 percent of all activity in the category. Qualifying TV Dramas that filmed during the second quarter included The OA, SWAT, Strange Angel, Snowfall, Mayans M.C. and Animal Kingdom.

On-location Commercial production continued to rise in 2018, up 14.2 percent in the second quarter (to 1,596 SD), finishing 16.8 percent above the category’s five-year average.

“The California Film and Television Tax Credit program has proven to be a vital tool against runaway production. And it is delivering results for the men and women who are the heart and soul of our entertainment industry and middle class — the people who swing the hammers, drive the trucks, run the cable, and serve the food on set,” said Los Angeles Mayor Eric Garcetti. “This report contains good news, but it also shows that L.A. has to stay in the fight to keep jobs and revenue where they belong — right here, in the creative capital of the world.”