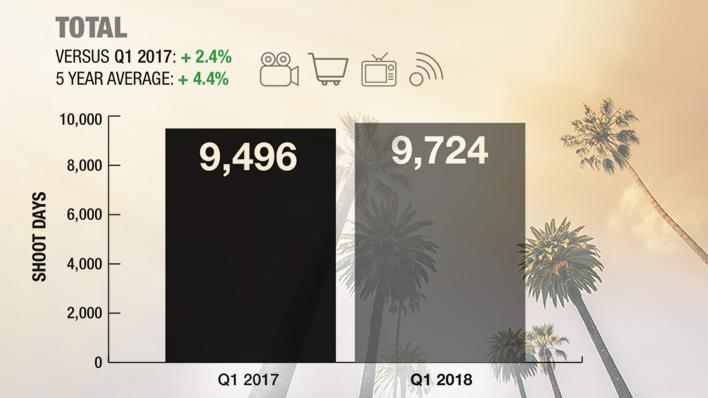 On-location filming in Greater Los Angeles increased 2.4 percent in the first quarter of 2018, according to a FilmL.A. report released today. In all, 9,724 Shoot Days (SD)* were logged during the period, including all categories tracked by the nonprofit. On-location Feature production experienced its first double digit bump since 2015 (4th quarter), up 11.7 percent to 814 SD.

to see increases in high job producing categories in film and television production,” said Paul Audley, FilmL.A. President. “The California Tax Credit program is sustaining the industry in our region and demonstrates how critical it is for a continuation of the program.”

Incentivized projects, brought to Los Angeles by the California Film & Television Tax Credit Program, contributed 20 percent, or 161 of the Shoot Days in the Feature category in the first quarter.  Incentivized Features that filmed in the first quarter of 2018 included Bird Box, Peppermint, The Devil Has a Name, Destroyer and Captain Marvel.

Captain Marvel was one of seven films under California’s incentive program with budgets over $100 million and is the first Marvel project to film in the state since Captain America: Winter Soldier in 2014.  FilmL.A.’s annual Feature Production Report — which is due out later this month — will further analyze California’s place among international competitors for new Feature projects.

On-location Commercials production rose 10 percent in the first quarter of 2018, to 1,633 SD.  The category is tracking 10 percent above its 5-year average.

“This report confirms what below-the-line-workers across Los Angeles are already experiencing – film and television production is booming,” said Los Angeles Mayor Eric Garcetti.  “Each new production means more good-paying jobs and a healthier economy for everyone. L.A. is the creative capital of the world, and we’re going to keep it that way.”