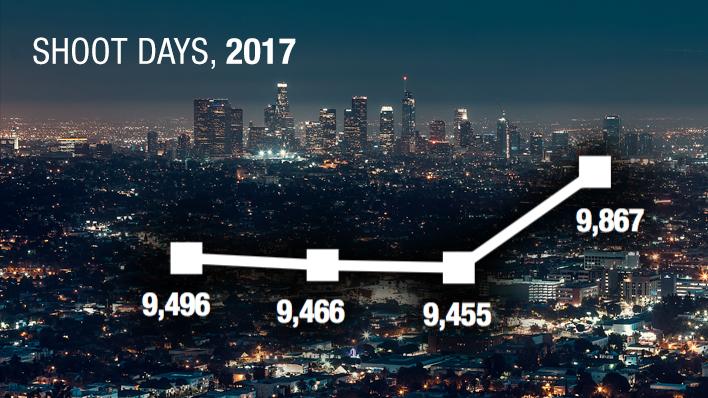 “This report confirms what below-the-line-workers across Los Angeles are already experiencing – film and television production is booming,” said Los Angeles Mayor Eric Garcetti. “L.A. is the creative capital of the world – and we’re working hard to keep it that way, because each new production means more good-paying jobs and a healthier economy for the entire region.”

FilmL.A.’s longest-running reporting effort, focused on production that takes place on-location within its service area, determined that filming levels in 2017 remained high despite finishing below 2016 totals.

On-location Television production finished 2.1 percent above its five-year rolling average in 2017, despite slipping 7.6 percent (to 15,218 SD) over the prior year.

TV Dramas ended last year 11.2 percent over the category’s five-year average, slipping 1.3 percent (to 4,385 SD) year over year.  A 21.3 percent fourth-quarter increase helped, as did the California Film and TV Tax Credit program which continues to sustain local production.  TV Dramas saw 1,401 incentive-linked Shoot Days in 2017, which accounted for 32 percent of all activity for the year.

“Our ability to achieve and sustain a high level of production over the past few years is substantially due to the California Film and Television Tax Credit – which is creating thousands of jobs and returning high economic benefits to California,” said Paul Audley, FilmL.A. President.

Incentive-linked TV projects that filmed in 2017 included This Is Us, SWAT, Westworld, Lucifer, Shooter and the TV Pilot project, Mayans.

Television subcategories ineligible for state incentives also decreased compared to 2016, including TV Reality (down 8.3 percent to 4,383 SD), and Web-Based TV production (down 9.2 percent to 1,918 SD).

Meanwhile, on-location Feature production decreased in 2017 (down 19.8 percent to 3,901 SD).  FilmL.A. analysts note that while the total number of Feature shoot days is down, the economic value of projects in this category may be increasing over time.  Feature projects that qualify for California’s Film & Television Tax Credit tend to generate larger job and spending impacts than non-incentive-linked projects.  In 2017, 61 Feature projects filmed in Los Angeles, including 19 incentive-linked projects with a cast & crew count above 75 persons on-location.  This is nearly twice the number of incentive-linked, similarly-sized projects the region captured in 2016.

Commercial production increased 9 percent in 2017 (to 5,548 SD) compared to the prior year.  This is the strongest annual showing for Commercials that FilmL.A. has ever observed.

During the first six months of 2017, the overall occupancy rate at studio partner facilities was 92 percent.  During this time, scripted television series (including both one-hour and half-hour series) accounted for 63 percent of total stage and backlot-based film activity, generating 2,982 SD. Next came TV Talk shows, with 753 SD, or 16 percent, of total stage activity.  Results for other tracked categories appear in the attached chart. 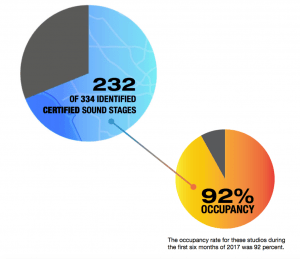 FilmL.A. encourages all with an interest in L.A. sound stage production to download a free copy of the inaugural Sound Stage Production Report.

Going forward, FilmL.A. will update soundstage data on a bi-annual basis, while continuing to recruit new studio partners. The latest studio to join the project is Quixote Studios, which operates seven stage facilities in the L.A. area, with plans for future expansion.