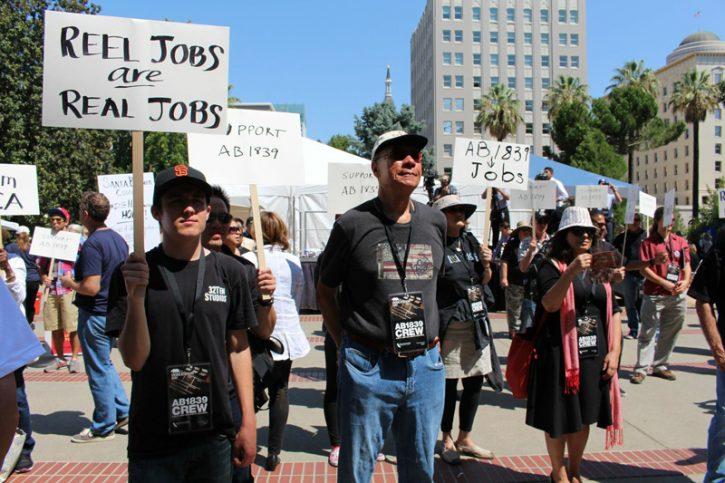 The behind-the-camera workers of the film and television industry transformed the California State Capitol into a production studio for the California Film and Television Production Alliance Mobilization Day on Wednesday August 20, demonstrating to lawmakers how the jobs that bring our favorite movies and television shows to life also vitalize the state’s economy.

AB 1839 (Gatto/Bocanegra) the California Film and Television Job Retention and Promotion Act of 2014, is currently before the State Senate after having cleared the Assembly with 76 bi-partisan votes.

Among the film and television workers participating were the crew of the ABC Family hit series “Pretty Little Liars,” Director/Actor Carl Weathers of “Rocky,” Actor Ron Perlman of “Sons of Anarchy, and Actor/Director Daniel Stern of “Home Alone.” Also joining the workers in support of AB 1839 today were labor union leaders and film commissioners from across the state. In addition to these participants, the event drew the attention of approximately 300 attendees, among them media, passersby, elected officials, and their staff members. See photos from the event below.

The interactive event enabled participants the rare opportunity to find out all the hard the behind-the-scenes work that goes into film and TV production straight from the hard working Californians who make it happen, including a “green screen” that enabled attendees to become a part of the on-screen action, make-up artists and hair stylists who demonstrated how they transform actors into our favorite characters, and foley artists who showed how they create the sound effects for movies and TV shows.

The California Film and Television Production Alliance is a statewide coalition of guilds, unions, producers, small businesses, and associations that have worked together for more than a decade to promote, improve, and enhance film and television production in the State of California.