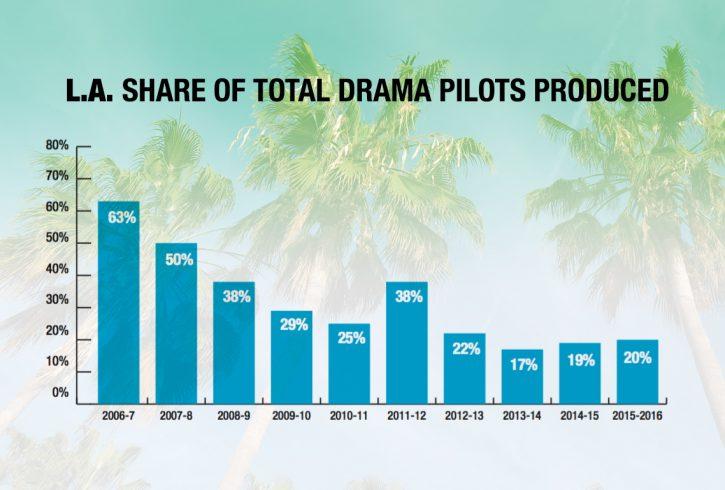 Earlier this month, FilmL.A. released its annual Pilot Production Report, which tracks where television pilots are produced each year.  FilmL.A.’s official count shows that 201 broadcast, cable and digital pilots (123 Dramas, 78 Comedies) were produced during the 2015-16 development cycle, just one less than the prior year.

Out of those 201 pilots, a total of 79 projects (25 Dramas, 54 Comedies) were filmed in the Los Angeles region, yielding an estimated $296 million in production spending.

In terms of project count, this represents a 13 percent drop from last year, when 91 pilot projects filmed in L.A. The decline can be attributed to a 23 percent year-over-year decrease in local comedy pilot production. Drama pilot production, on the other hand, increased appreciably over the same period.

“While we were disappointed to see a decline in local comedy pilot production, recent growth in drama pilot and series production is encouraging from the standpoint of overall area jobs and economic benefit,” said FilmL.A. President Paul Audley.

FilmL.A.’s report closes with a discussion of the drama series production landscape in California. Thanks to the state’s Film & Television Tax Credit Program, more primetime drama series are in production in California today than at any point since 2008. Half of the state’s 64 current drama series are incentive-qualified projects. The impact of these incentivized dramas (and Veep, a comedy on premium cable) is massive. According to spending and employment data provided by the California Film Commission, these series will have a direct production spend of $1.59 billion while shooting their current/upcoming season.

“The California Film and Television Tax Credit program has proven to be a vital tool in the fight against runaway production. And it is delivering results for the men and women who are the heart and soul of our entertainment industry — the people who swing the hammers, drive the trucks, run the cable, and serve the food on set,” said Los Angeles Mayor Eric Garcetti.

“This report contains a lot of good news, but it also shows that L.A. is still losing too many good jobs, and too much revenue, to other states. We must continue investing in the future middle class of this city, and commit ourselves to doing all we can to ensure that production stays where it belongs — right here, in the creative capital of the world.”