Set 400 years in the future on a mid-level exploratory ship populated by a rag-tag human and alien crew, Fox’s The Orville is about the wonders and dangers of outer space.  And while the L.A. based show includes obligatory sci-fi elements, The Orville also delves into the often humorous problems of everyday life. Boldly going where few shows have gone before, the breakout series uses the vehicle of space exploration to deliver a surprising dash of social commentary.

FilmL.A. staffers recently visited the show’s impressive set on the Fox Studios lot and experienced things that would leave a fanboy giddy with excitement. Our behind-the-scenes tour was courtesy of Unit Production Manager (UPM) Jason Roberts, who clearly — and proudly — is a fan of the show himself. 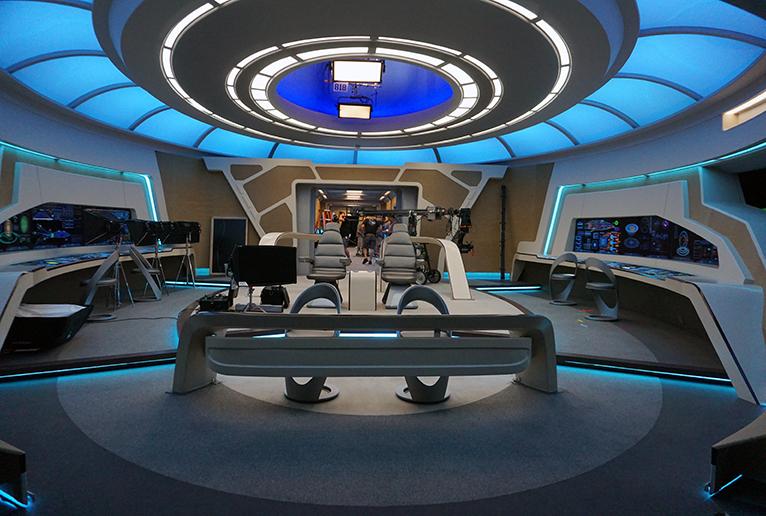 While comparisons to Star Trek are inevitable, this show has one thing going for it that the current Trek series doesn’t: The Orville is made in California. The reason the show calls California home is the California Film & Television Tax Credit Program. Before being awarded a California tax credit, show producers explored filming in New Mexico and Colorado.  Getting the incentive in California was a blessing for the production team, which feels that the unique locations, outstanding crew and infrastructure available in California makes it the best place to film.

The show takes full advantage of California’s robust film incentive, which offers enhanced perks for doing visual effects (VFX) in the state and, whenever possible, for filming outside of Southern California’s 30 Mile Zone.  The perk for doing VFX in California is meant to help the state’s beleaguered VFX industry, which incurred heavy losses from years of runaway production. And because California policymakers added extra incentives to film outside Greater L.A. and spread filming’s economic benefits around the state, The Orville has filmed in the counties of Kern and Ventura and also plan to film in Mammoth for scenes requiring snow.

Although The Orville films only 13 episodes per season, the show takes almost a year to complete as the unique sets and story lines require VFX, props, sets and costumes all from scratch. Star and Executive Producer, Seth MacFarlane, is involved in every aspect of production, from writing, shaping the look of the show, visual effects, post production and even the music selection, which is scored by a full L.A.-based orchestra. MacFarlane has surrounded himself with an amazing cast and crew who know how to deliver top notch television.

The main set for The Orville is a striking two-story build (which is very rare for a sound stage) and is the location of the ship’s key interiors. At a cost of $5 million dollars, the set is designed to morph itself for each episode’s technical shots and for season two, the set was upgraded to fully capture MacFarlane’s vision. 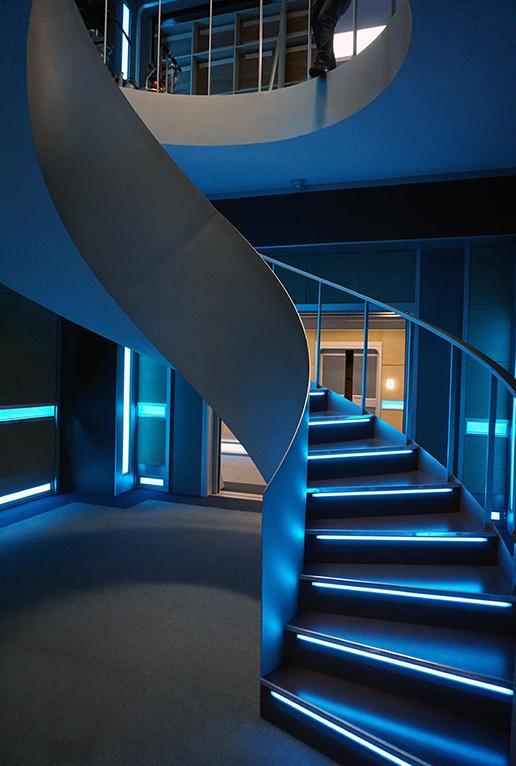 The most remarkable aspect of the set is the million dollar LED lighting system, which is controlled by an experienced Board Operator who makes precise real time adjustments while the cast is filming each scene. 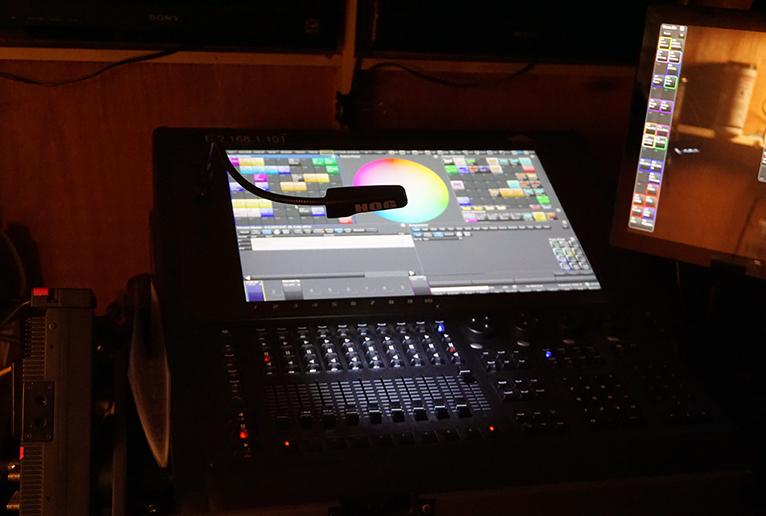 The incredible lighting system can reflect the action taking place on the ship at the touch of a button and enrich each character by assigning them their own color scheme in their quarters. In addition to the main soundstage, the show uses an additional stage for swing sets and, if needed, other stages if there is space on the lot.

A show set in space also includes a notable amount of green screen use, to generate all the visual effects that simulate space. For The Orville, a blue screen is also used which, the production learned, is easier for the actors to work with, resulting in fewer takes. Being a good neighbor at Fox, the show routinely offers other productions on the lot the ability to use their green screen when it’s not in use.

Each episode of the show has an eight-day schedule, with 5-6 days on set and 2-3 days on-location. Outside locations are chosen for their unique look and favorite places to film include the Disney Ranch, Blue Cloud Ranch and Piru. Surprisingly, only a small portion of these diverse locations are incorporated into the show as-is, as graphic designers enhance the background digitally to turn the location into an alien world, according to Roberts. 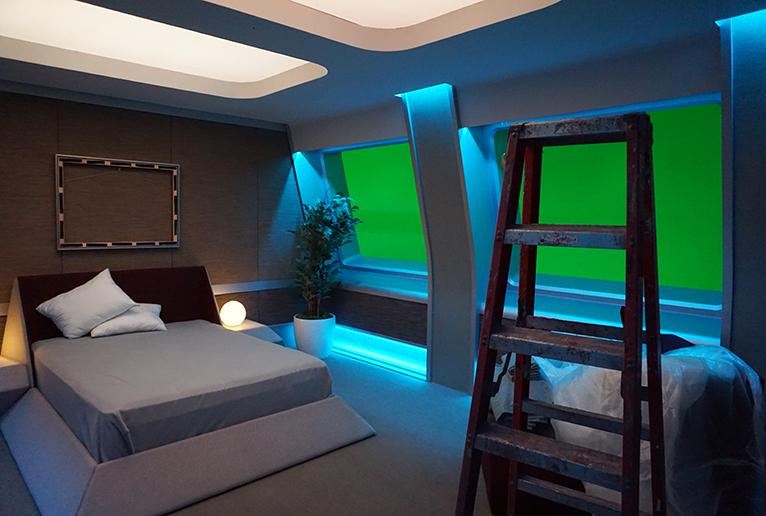 An experienced union crew almost 300 strong collaborates on the wardrobe, props, special effects make-up, VFX and construction to re-create the universe for each week’s story. Nothing you see on the screen is off-the-shelf. Everything is made to order by dozens of talented artists and technicians who work on the show.

If a cast member appears as an alien, that actor is cast 6-8 weeks prior to the shoot so they can be measured and molded for prosthetics. Likewise, the wardrobe department and its group of five highly skilled tailors create costumes from original sketches, using unique materials purchased for their look, color and texture.

This same level of craft applies to the props the actors will use, the graphics displayed on the ship and every other facet of the production. 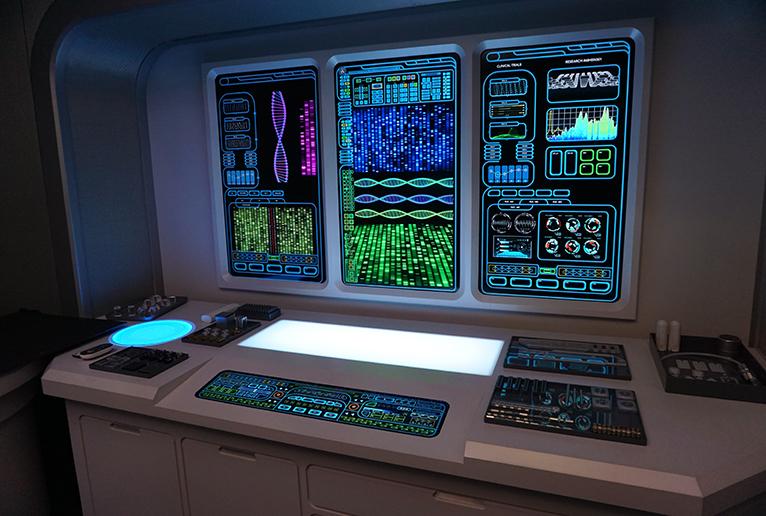 The amount of work performed by the hundreds of cast and crew who work on the show, not to mention the dozens of outside vendors from local VFX houses to catering companies means The Orville packs a major economic punch in California. The upcoming second season of the show means a direct production spend of almost $80 million in California, a sum that rivals many major feature films and generates an economic impact in multiple communities in the state.

Both Production Supervisor Ryan Ford and UPM Jason Roberts emphasized their admiration and respect for the talent and dedication of the crew and cast. As filming requires long hours, with at least a 12-hour workday, going home to their families and supporting the local economy is an extra bonus on top of each day’s work.

The Orville returns for its second season on December 30th, 2018 on Fox.

5 Comments on “The Orville’s Space Adventures via Los Angeles”