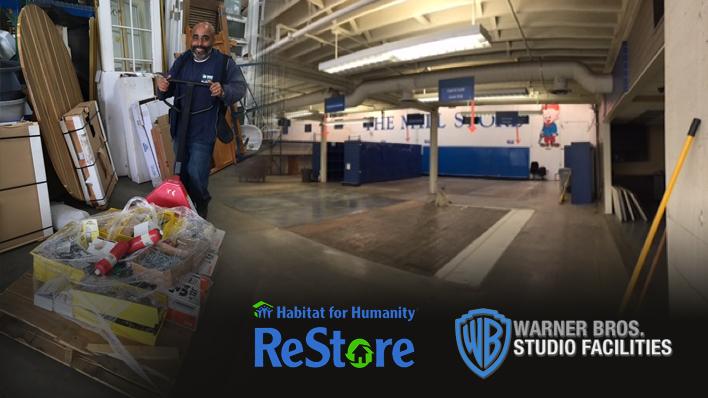 If you have ever been on the Warner Bros. Studio Tour Hollywood, you probably passed through an iconic landmark called “The Mill” and its accompanying shop, the Mill Store. While The Mill continues to support productions all over town, the Store recently closed its doors – but not before donating surplus items to the Habitat for Humanity Los Angeles ReStores.

The Mill, which houses the studio’s design and construction departments, has enjoyed a long history supporting feature film and TV productions.  Among the popular TV shows serviced by the Mill are ER, Friends, The Drew Carey Show, Gilmore Girls, Everybody Loves Raymond, Mike and Molly and The Big Bang Theory, while The Perfect Storm, The Dark Knight, Oceans 11, 12 and 13, The Last Samurai, Poseidon, J. Edgar, Jersey Boys and The Conjuring 2 are some of the countless films that utilized the facility during production.

The adjoining Mill Store opened more than 22 years ago. Its original goal was to provide employees and productions with on-the-lot access to expendables, production, construction and office supplies, as well as snacks, sandwiches, drinks, and branded merchandise.  Going forward, the Mill Store will merge with the existing Paint Department.  The Paint Department’s focus will be on production sales items like paint, lumber, hardware and grip expendables.

I was delighted to learn from Melody Jaramillo (from our WB Public Affairs team) that we were partnering up with Habitat for Humanity ReStores!  We had less than one week to physically close the Mill Store and make decisions on the disposition of our excess metal shelving, hardware and refrigerators. John Smith, our V.P. of Operations, and I worked together with our in-house labor team to begin the intensive job of dismantling the many rows of metal shelving and preparing the items for pick up. We had three large donation pick-ups during a very busy time here at the studio.  Karen and the Habitat for Humanity ReStore team were accommodating, professional and great to work with.  We are so glad that this material will be put to good use!

THANK YOU to Jack and his team at Warner Bros. Studios for the large donation from the Mill Store. They successfully donated and recycled their materials instead of sending them to the California landfills. It is donations like this that help raise awareness of the film industry’s ongoing commitment to environmental sustainability.  If you have a set to strike or re-usable building materials to donate, give your local Habitat for Humanity ReStore a call!