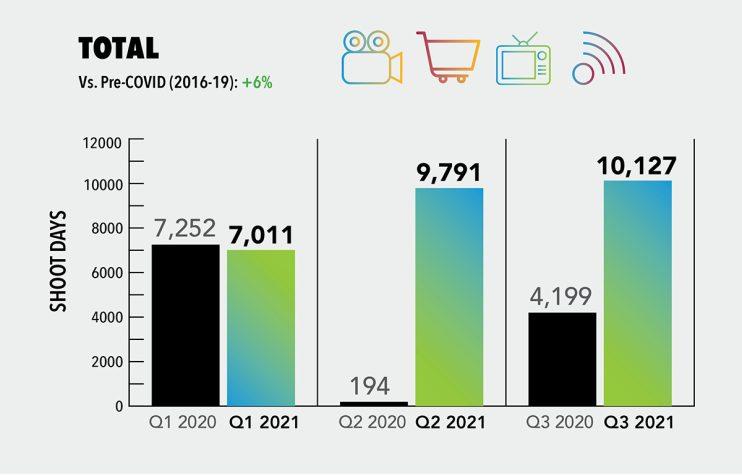 FilmLA, partner film office for the City and County of Los Angeles and other local jurisdictions – today issued an update regarding regional filming activity.

On-location filming in the Greater Los Angeles Region continued its late-pandemic momentum into the third quarter (Q3), which ran from July 1 through September 30. FilmLA analysts noted that it was the third strongest quarter seen in twenty-six years, with a total of 10,127 Shoot Days (SD)*. The last time the region saw filming levels this high was in Q4 2018 (with 10,359 SD) and Q4 2016 (with 10,170 SD).

Looking at the major production categories tracked by FilmLA, the pace of Feature Film production quickened the most in Q3 of 2021, growing 33.5 percent over Q2. By the same measure, activity for Commercials and Television was mostly flat, with less than a one percent difference quarter over quarter.

Measured against this standard, the Television category is in historically good shape, posting the strongest Q3 gains 22.1 percent above the Q3 pre-COVID average. This trend in also seen in Commercials, tracking 15.5 percent above past figures. Both the Feature Film and Other categories, however, fell short of their pre-COVID average, highlighting the still-uneven nature of the industry’s local recovery.

The biggest takeaway from this report is that the pace of local production continues to increase. The late-pandemic recovery is uneven in some ways, but community receptiveness to filming is steady and the work opportunities are undeniably there.”

Broadcast TV series that filmed locally this past quarter include SEAL Team (CBS), NCIS: Los Angeles (CBS), Mr. Mayor (NBC), This is Us (NBC), and ABC’s The Rookie and Home Economics. Cable series include two of Showtime’s new series – Super Pumped and an untitled LA Lakers project – as well as Better Things (FX), and Chad (TBS). Streaming series that shot during Q3 include HBO Max’s The Flight Attendant and Made for Love, Pen15 (Hulu) and Netflix’s forthcoming series – Monster.

On-location production figures are based on days of permitted production within the jurisdictions served by FilmLA. One “Shoot Day” (or “SD”) is defined as one crew’s permission to film at one or more defined locations during all or part of any given 24-hour period. This measure determines how many days of work film crews perform during a given time period. FilmLA data does not include production that occurs on certified sound stages or on-location in jurisdictions not served by FilmLA.