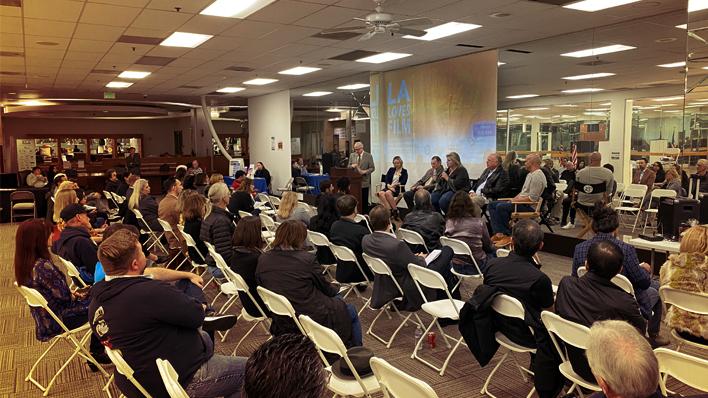 The event launched with welcoming remarks from Michael Owens of Los Angeles City Councilmember Bob Blumenfeld’s office, before moderator Sean McCarthy engaged the night’s panel in a lively conversation about attracting filming and best practices for hosting filming in a business or retail setting.

On hand for the panel were two of FilmLA’s own, Permit Operations Director Josh Mingo and Outreach Liaison Carri Stevens, plus three experienced location professionals.  Among them were Greg Alpert, COLA Award winning location manager recently with “Big Little Lies,” Jennifer Dunne, location manager on projects such as “Lisa on Demand” and “L.A.’s Finest,” and Michael Burmeister, COLA Award winner working recently on projects like “Hotel Artemis” and “Suburbicon.”

The evening’s far-ranging conversation featured a variety of tips and advice for first-time film hosts.  Here are just a few of the highlights from the conversation.

FilmLA shares its gratitude with all who gave of their time, space, and expertise to make this a successful event.  For information about upcoming LA Loves Film events in your area, join the campaign mailing list below.